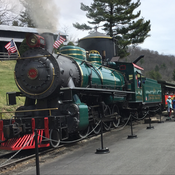 The Polar Express is a children's book written by Chris Van Allsburg, published in 1985 by Houghton Miffin. The book was very popular, and even won a Caldecott Award. In 2004, Warner Brothers Studios teamed up with acclaimed film director Robert Zemeckis to produce a movie based on the book named, yep, you guessed it, The Polar Express.

Included in the set is the iconic 2-8-4 Berkshire Steam Locomotive that would lead the train. the train has a rather simplified design to keep in line with the movie, and to help keep the set easy to build for the younger builders. Behind it, is the tender, which contains the necessary Power Functions to "propel" the train down the line. the Power Functions components included in the set is the 8878 Rechargable Box, the IR reciever, the 88002 Battery Box, the 8884 IR Reciver, the 8887 Transformer (not shown) and the 8879 IR speed remote controller (also not shown.)

Last, but certainly not least, is the lonely old observation car at the back of train, where Billy from the poor end of town sits all by himself. the observation car includes a rounded platform like in the movie.

Also included is a giant loop of LEGO track. The Centerpiece being Flat Top Tunnel, which has just enough clearance for the train. like the Hobo says to the Boy, "there's only 1 inch clearance between the roof of this rattler, and the roof of Flat Top Tunnel." and finally, a small push around Elf Handcar which is seen toward the end of the movie.

This set will include 12 minifigures: The Hero Boy, The Conductor, Smokey the Fireman, Steamer the Engineer, The Hero Girl, the Know-it-All kid, Billy, The Hobo, The Hot Chocolate Chef, the Hot Chocolate Waiter, and 2 elves.