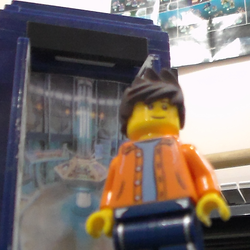 This build is based of the one of the many boss characters from the R.P.G called Undertale. This character is a small flower named Flowey (the first character you meet) who transforms into the most powerful being alive, Omega Flowey. It also includes Frisk, the red soul. I built this model because i'm a big fan of the game and would love to see a set based on it come to fruition. I believe that it would be a great set because it could draw Undertale fans to become LEGO fans as well.

Please note that all characters and names are property of Toby Fox.