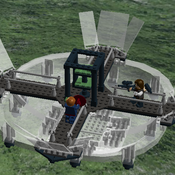 Ever wonder where Boba Fett has his center of operations based? Here's my idea for what would make a great base for Boba Fett. The basic idea is that it's a durasteel and rock bunker deep inside a mountain (that's why there isn't much detail to the outside), and Fett can fly Slave I through a dormant volcano opening down to his platform.

The landing platform is just a black and gray platform made of tiles. I may enlarge the platform later on so it can fit the UCS Slave I better. The entrance hall is basically a cave shaft with finished durasteel pillars and lighting. The rock walls are black because it's volcanic rock. I put sliding blast doors at the beginning of the entry hall, but that leaves the ship unprotected if someone should happen upon the base, so presumably the entire bunker is closed off by its own giant blast doors above the ship in the volcano shaft.

The entrance hall leads straight into the armory. The armory includes a rack for Fett's jetpacks  and 2 different style helmets. I made a few renditions of the jetpack that look more powerful and more movie accurate than the little clone jetpack the current minifig has. On the armory wall are clips to hold several other parts of his equipment, including four of the blasters the Boba Fett minifig has historically been equipped with, Jango Fett's pistols, a pair of binoculars, a pair of handcuffs, a fibercord whip, a knife, and some dynamite .

To the right of the armory, when you walk in  through the entrance hall, is Boba Fett's trophy room. On the far wall is a glass case containing Fett's "Best Bounty Hunter of the Decade" awards, of which he has one third place trophy (from when he was a kid, obviously) and two first place trophies. Also in the glass case are smaller "Most Dangerous Man of the Year" awards, of which he has several first and second place trophies -- Vader had him beat several years straight, but Fett has proven himself the more deadly of the two in recent years. Along the two side walls is Fett's collection of lightsabers from Jedi and Sith he has defeated. In the center of the room is a valuable holocron he took from a fallen Jedi.

On the other side of the armory is Fett's office. It contains a trash bin, a boombox, a bed which is folded onto the wall, several advanced holomap consoles, and a desk with holographic screens.

Obviously, the ideas for this base are mostly out of my own head, and don't really match up with the "official" expanded universe stuff, but I'm a huge Boba (not Jango) Fett fan and I don't really care much for the typical expanded universe. If you think this set is cool and is a good idea for where Fett lives, please support it!