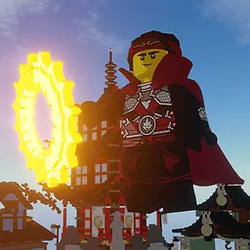 A long time ago, in the land of Dang, a Nameless Evil (named Gnag) grew. His presence loomed ever darker upon the surrounding land. His presence was matched only by his marring of the Maker's way, for he had found a way to meld man with beast! He called his hideous creatures Fangs, and fangs they had aplenty (for a more detailed description of the loathsome Fangs of Dang, see Book I of The Wingfeather Saga, WaterBrook, 3/2020).
With this, his evil horde, he stormed the Shining Isle of Anniera to find some powerful Jewels. However, as the castle burned, they slipped through his fingers and were taken across the Dark Sea of Darkness to the land of Skree. He gave chase, but lost them and spent 9 years (after mercilessly conquering the people there who surrendered, for the most part, without a fight) searching for them - and then they were found in Glipwood. Once again, however, they escaped his grasp and - but that is not the purpose of this scroll. (For a detailed description of the escape of the Jewels and their protectors, see Book II of The Wingfeather Saga, WaterBrook, 3/2020.)
* * *
Today marked the fifth day since Amrah had sent Gargk to the cage with her generous offer of power and forgetfulness to the crazed bird-man, Artham. It was surprising how long he had lasted, considering his history across the Dark Sea, but she shrugged that off.
"The Bird Man says he'll see you now," Braqk said. "I'm not sure why you're letting them all go, though. It's not doing them any favors."
"Don't worry, Braqk," Amrah smiled at him. "I know what I'm doing."
She walked over to the cage, her cowl nicely tucked over her head, entering the room with his cage in due course.
"It's almost over," the Bird Man was repeating to himself quietly. "It's almost over."
"Yes," she said, using her most beautiful cadence. She inwardly delighted as the Bird Man stopped trembling. "Everything will be fine, Artham Wingfeather. You have nothing to fear."
She bent closer to the cage and removed her hood.
He was as startled as she had planned to see her raven black hair and snowy skin. Good.
"Poor Artham. How long have you been running?" she asked rhetorically. "Nine years? And now," she dropped her voice down to a soft purr. "you can rest. The Black Carriage is coming with more of the broken, more who are tired like you. But I will set them free if you will sing the song. Is that what you want?"
The Bird Man nodded.
"Alright." Here came the part of the plan she had been working on for days. "But first, they're going to watch. I'll let them see the magnificent creature you've become when you step through the door on the far side. And then," she glowed at the pure deviousness with which she had devised this plan. "I'll let them choose. If they want to to go free, I'll let them go into the wilds of Skree, powerless and alone, as you wish" that dig came to her on the spur of the moment. "-or they can give them selves to Gnag's service. I can make them strong and give them an army of comrades." She stood up and let her voice rise to the gathered Fangs. "Can I not?"
The group growled and howled and snapped their teeth.
In the distance, she heard the Black Carriage approaching. As the lanterns got brighter, lighting up the cave. All four horses strode into the enclave, their breath steaming from their nostrils.
Amrah pulled her hood back up and returned to the dais. "Line them up!" she commanded her fangs.
She would have to get some normal servants to do that job, she mentally noted as every single one of the children took on expressions of terror or fear.
All but one, that is. Maybe she wouldn't have to after all.
He was as skinny as a battle-worn spear, with brown hair, and he was not afraid, but the look on his face, that is, what she could see of it since he was examining the floor, told her that he was ashamed. Then he hung his head, and resigned himself.
The Bird Man went crazy again as soon as he saw that boy. He rammed his head into the top of the cage, and started flapping, squawking, and shrieking, trying to scream out a word. Fortunately, the Grey Fangs moved in before it was possible.
* * *
Artham clutched Kalmar close. He was taking him to the Ice Prairies, to rejoin the rest of their family. It would take time, but all would be well.
* * *
New Editions of The Monster in the Hollows and The Warden and the Wolf-King release Oct. 6!
This model includes a rotating Fanging function, a cage, and a microscale model of the Ice Prairies.
Minifigures:
Stone Keeper
Fangs x2
Civilian
Kalmar Wingfeather (Human/Wolf)
Artham Wingfeather
Thanks for supporting
#TheStoriesAreTrue
74
339
days left