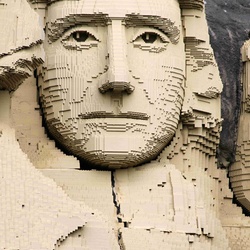 This R2 D2 is a good size for play, and also looks great as a model.  It has a retractable third foot that moves up into its midsection when it is standing upright.  To retract it there is a lever in his back that attaches to the underside of the torso, and when the foot is out the lever attaches to the lower part of the torso.  There are also details on the head, which is able to rotate.  Even though his torso does not open up to reveal little maintenance arms, this may be included in a later update.

I believe this should be an official set because, for one, there is a minifugure-scale R2 D2 (the first set he shows up in is LEGO Star Wars Naboo Fighter 7141) and a Ultimate Collector's Series R2 D2 (set 10225).  Nothing in between.  The second reason is because there are still very few midi-scale Lego Star Wars sets, and it would be awesome to have more.

Please vote for this model!