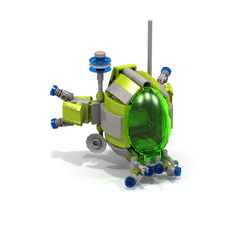 ExoSolar's CM-G Mob bII-C "Plug" Construction Mech has been the work horse of humanities expansion into the galaxy for decades. Known as a dependable general purpose mech the "Plug" can be found anywhere humanity has gone or is considering going in this galaxy.

Equipped with an exaction arm perfect for busting the regolith on Sellion's moons in search of tellurium crystals or transporting permacrete to repair the shuttle port tarmac on Ellipsion Prime the "Plug" can handle the load.

For demolition work of the old titanium refinery on Ios or load shifting in the hold of an interstellar cargo ship the "Plug" is equipped with a double hook working hand. And for those more delicate tasks, a back-mounted, articulated claw is perfect to assist with positioning a load or welding.

Humanities expansion continues to rest squarely on the shoulders of the "Plug."