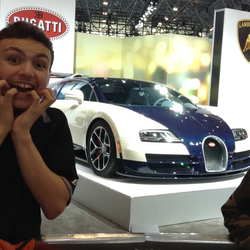 After the Super Car and the Super Boat were put out of commission by the super villain Uncle Wasabi, Super Luke has one last hope to stop the menacing Japanese restaurant owner.  The super bike is the most reliable (and only) bike ever produced by Future Tech, it has a top speed of 457 mph and Super Luke can fire at Uncle Wasabi with the side mounted laser pistols.  He also can attack from the sides of the bike with the side mounted hunting knifes.  Robotic ball joints on the side rear have two copies of Super Luke's shield protecting the White Knight of Pure Light.

In the Hero Jet, all of the Teen Heroes are hunting Uncle Wasabi, who stole a nuclear reactor from the secret Futuresburg Retaliation Base: The Hexagon, to power a weapon of his.

"But how do you know?" Hex-J replied.

"Cuz he's the only guy with a nuclear reactor in the back of his car."

Super Luke dropped from the Hero Jet in the Super Car and started firing at the food truck with the side mounted lasers that pretty much all missed.  after that broke down (thanks to some of Uncle Wasabi's special wasabi mix) and the Super Boat, the last thing left was the Super Bike.

Will Uncle Wasabi Get away with the nuclear reactor, or will the heroes triumph in another success?  You decide, with Super Luke's Super Bike and Coming soon, The Teen Heroes: Food Truck Mayhem!

Please Support, took me a day to make!