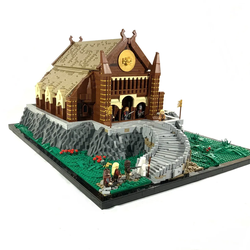 theLOTRbuilder
238
363
days left
This is a moc (My Own Creation) of the Dark Tower from the Lord of the Rings trilogy, more commonly known as the Tower of Barad-dúr. It is one of the largest mocs I have built so far, but intend to build many more Lord of the Rings themed ones. It is by far the tallest build I have build, standing roughly two feet ten inches high, standing a little higher than the Tower of Orthanc Lego set. It took me about two weeks to build, and it is my favorite thing I have ever built. I built it because I love the Lord of the Rings movies, and enjoyed the books, and I think this tower should have been made a Lego set before
This model is on a micro scale, as if it was minifig scale it would have to be much, much taller and would then be too large to be approved on Lego Ideas. I made the layout of this build about the same that I saw in the movie, with the tower towards the back with other turrets shooting up around it and its gate being in the front, as well as the tower being built into rock. I achieved the majority of the curved wall shapes by using hinge bricks, which I find generally give a good, nice curve, depending on how it is angled. The building techniques I used were reasonably simple; I mainly just used stacking and SNOT (Studs Not On Top). It was however very difficult to figure out how to make the two curved walls line up with each other and also made the plates at the bottom of the tower line up with each other. There were several geometry issues I had, and I'll admit the build isn't perfect, but I still think I can be very proud of it. I think if Lego actually made this into a set the building would be much simpler, but I still think this would make an amazing Lego set, and I hope all of you agree!
The primary colors I used in this build were black (obviously), dark gray, yellow, red and blue (all for filler), and then I used quite a bit of transparent red, yellow and orange, mainly for the lava at the base and the eye of Sauron, which I had quite a lot of fun building.
There is no interior design for this model. The core reason for this is that I built this to be more of a display model, not one meant for playing. I do however believe the Lego would undoubtedly design an interior if they did make this into a set, and add minifigs.
I hope y'all like my Lord of the Rings Barad-dúr project! Please support!
238
363
days left