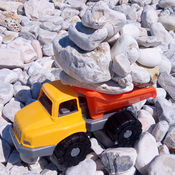 By BENNI77
187 comments
This set is inspired by the film "The never ending story". After having seen him again with my children, after so many years, for me it was like returning a child. I still remember the amazement of seeing the film for the first time, my amazement seeing the acrobatics of the "Fortuna Drago-Falkor". Knowing the passion I have for LEGO, they asked me if I could do some of the characters seen in the movie for them. I started work, giving space to my imagination and trying to create characters that could also be used by them, without breaking them. I like to build, experiment, make mistakes, change, analyze. I don't know how many pieces I've used, I don't count them. This is the result of what I managed to do with my LEGO.
There are some of the main characters of the film: Bastian reading the book in the attic of the school, Atreyu and his horse Artax, Rockbiter, the Infanta empress, Mork the terrible beast, Morla the turtle, Teeny Weeny, Wuswusul in back to a bat and finally the final scene of the three bully boys throwing themselves into the waste bin at the sight of the falkor Dragon.
If you like what you saw and think it could be a future LEGO Set, push the SUPPORT button and leave your COMMENT. Share the project.
. Thank you for your attention and your contribution.