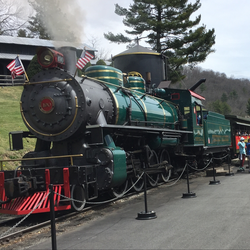 Tweetsie Railroad is a small theme park located on Highway 3-21 between Boone, and Blowing Rock, NC. The history of the park dates all the way back to 1866, with the founding of the Eastern Tennessee and Western North Carolina Railroad. The line provided services for the mountains communities it served, until October 11th, 1950, when the line was disbanded. Most of the eqquipment was then scrapped. However, one of the locomotives, #12, built in 1917, along with a couple pieces of rolling stock managed to survive into preservation. After a sucessful, all be it short carrer on a small tourist railroad in Harrisonburg Virgina due to Hurricane Hazel, she was purchased by Grover Robbins Jr. and Frank Coffee who retuned the little engine home to the mountains of North Carolina, following a restoration at Hickory, NC. Today, the Tweetsie Railroad transports guests around a 3 mile loop of track for a journey into the Wild West, complete with a train robbery and indian ambush.

The LEGO version of the train you see here comes with Tweetsie Railroad's locomotive #12, the "orignial Tweetsie engine." The locomotive provides an accurate, yet simple take on the little engine, with everything down from the color to the cab being as close to "picture perfect" representation to the prototype. Behind the locomotive, is a small tender, which would carry the nessasary coal and water for the hungry locomotive.

Trailing behind the locomotive, are 5 open-air passenger coaches, so passengers can get a good view of all the action aboard the train. each coach contains 6 seats each, sitting up to 30 minifigures total, and the rear coach has an observation platform for the conductor as he gives his speil for the passengers. Also icluded is a simple oval of track for your train to travel 'round, because, let's face it, what's a train without it's track?

But the passengers aren't the only ones on board for the ride. Riding with the passengers are Tweetsie's cowboys, one per coach minus the rear one. 2 of them happen to be the dumbest train robbers in the Blue Ridge Mountains, The Flamin' Hot Sauce Bandits, Texas Pete and Tobasco. Luckily, the Sheriff and Deputy are also on board to keep them in check. But it's not just the bandits who are out to cause trouble. Hiding amongst the woods are 3 members of the Tweetsie Tribe, who have tried time and time again, all be it unsucsessfully, to ambush the train. other minifigures include the engineer and fireman, the conductor, and Marshall Josie, with her trusty horse.