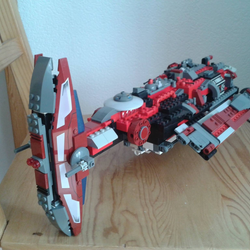 Inspired with world of Star Wars ,I created a model of spaceship dedicated for space pirates. Main idea was creation of the ship which have its own fighter. Ship is giving the possibility docking little fighter on its back. The set has 5 minifigures:

I think that the set can give much fun while arranging, as well also while playing.