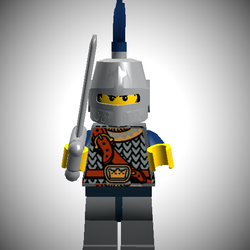 Join in on C.S. Lewis second book of the Chronicles of Narnia (Prince Caspian).

Prince Caspian should have been King but his Uncle Miraz is trying to take his throne and kill him.   Now he is running away with a black darwf Nikabrik and a talking badger named Trufflehunter (which I could not put in,because the software does not have them). Try to save Prince Caspian from the cruel Telmarines as he dodges arrows!

With your support  and 9,999 others this set can become a reality!