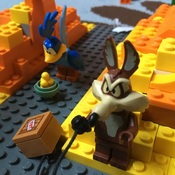 By CommandGardot
8 comments
The axolotl is an amphibian animal, near to salamander, with the characteristic that it stays on the larvae state, and has the ability to regenerate parts of its body.
My model is based on this animal, it has 131 pieces, the figure has a length of 20 cm and a height of 5.5 cm, from the front leg to the dorsal fin, near to the real size of the animal. It has a base to display the model between eight and nineteen centimetres. It can move all its legs, the head and external gills, the torso and the tail. I built it because this animal is an endangered species, that has been losing its population, so we can make conscience by this model. I think it could be a great LEGO set because this is an endemic specie of Mexico, specifically in lake Xochimilco, and is not too known around the world, and I think is a very interesting animal.