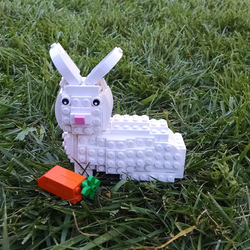 This is my Mini Mars Rover based off the design of the Rover that became a set on this website. The rocks in the back were added later to the model for a more real view of the Curiosity Rover on Mars. The red stud on the Rovers eye represents the lazer that is used for cutting objects open. My favorite part of this model is the wheels because they look similar to the ones that were used on the real Rover. Please support my Mini Mars Rover if you want lego to maybe consider making it a set one day.