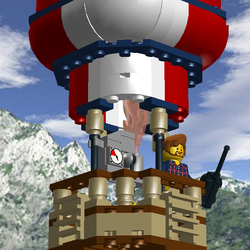 Aside from the Ford Explorer tour vehicles, the main way to get around Isla Nublar is the Jeep Wrangler Sahara staff vehicle. I've never seen a minifig-scale Lego version that I thought did the Jeep justice, so I decided to try making my own. The tan roll bar is easily detachable, so you can build a version like the one Ian Malcolm, Ellie Sattler and Robert Muldoon drive when being chased by the T. Rex. The doors and tailgate open, there's room for two minifigs seated up front with a bench seat in the back (perfect for an injured Ian Malcolm!), there's trunk space for accessories like flashlights (in case you need to look for pieces of Gennaro), working front winch and a spare tire is included. A brick-built model would include a cloth top so you could recreate the scene where Dennis Nedry is attacked by the dilophosaurus, but there's no way to make that on LDD. The top could be easily attached with pins through the Technic holes in the roll bar and windshield frame.