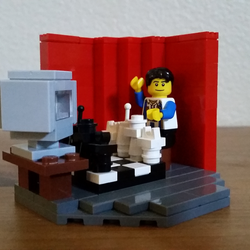 Hockey is a fast-paced and physical sport.  First invented in Montreal, Canada in 1875, this game brings excitement into the chilly winter air.  I crossed hockey with another fun game, pachinko, in my model.  Pachinko is a game of luck mostly found in casinos, but my smaller hockey version is more for fun.

Some notes about the model...

I think this would make a great set because it isn't just a decoration.  It is a fun model that is also a game with the excitement of hockey and the luck of pachinko.  Please support and follow my model.  Your feedback is highly appreciated.  Thanks!