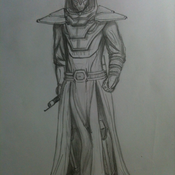 "Attention units ! Rebel forces were spotted in the remote underworld of Coruscant ! Quick, get into your AT-ITs and show the traitors no mercy ! This set comes with a rebel trooper, and 2 imperial Coruscant Stormtroopers."

After the first galactic empire was established, the Emperor invested many credits into military research, training and formation, to tighten his grip over the galaxy. The AT-IT was one of the first military projects on which Lieutenant Veers worked on, before moving onto the AT-AT. The idea was to combine the speed and agility of an AT-RT, with the firepower and toughness of an AT-TE. Many projects were submitted, but only two were chosen to finally be made : the AT-ST and the AT-IT. The first one was more agile and faster, while the other had very powerful weaponry. Indeed, the AT-IT had one rotating laser turret, two rotating main double laser canons, 2 rocket launchers, a long range double blaster canon, and a short range double blaster canon. It made this walker the perfect intervention AT walker of its generation, for large crowds, or big speeders. It even had enough firepower to break through, by itself, a Clone Turbo Tank hull. To maintain peace on the center worlds, like Abregado Rae, Corelia, Cato Neimoida, or even Coruscant, the Empire mostly sent AT-ITs, due to their high cost in maintenance, and their proximity to the Kuat system, where they were inevitably sent for repairs. As for the AT-STs, they were sent in the mid core worlds, and even out in the Outer Rim territories, like on Alzoc III, Bothawui, Kashyyyk, or even Endor, due to its quick adaptation, and easy maintenance. But, there was a major weakness on the AT-IT : the belly fuselage between its feet was very lightly defended, and became its main weak point aimed by rebel resistance. So, every AT-IT walker was called back to Kuat for re-evaluation, and eventually was replaced by a new generation of AT walkers : AT-ST/As.

Now for the set itself.

It was a hard project, especially for the legs. The head's high weight made me re-enforce the legs, which doesn't give the impression that it could walk. But, after static calculus, I finally managed to make it stand. It has a rotating head, that you turn thanks to a button at the back of the model. It has an opening hatch in which you can put two troopers, a rotating turret at the top, flick fire missiles, rotating laser cannons on both sides, and high detailing at the back. I would use usual Stormtrooper helmets and printings, with Coruscant guard colours for the Imperial Coruscant Stormtroopers, and usual rebel helmet and printings for the rebel trooper.

Hope you like the model, and its background. More coming soon.