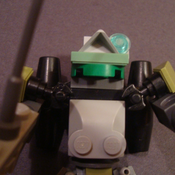 Kingdoms Board Game is a strategy game that can play 2-4 players ages 8+. Its a great simple and easy to learn game but yet highly addictive. This is also very easy to travel with and play on the go.

There are Four ways to play:

Land Control-Get each of your bricks on each opposing areas to win. You move by rolling a 6 sided die (1d6) and land on opposing bricks to make them go to the out cast island (green space).

Conquer-Get your king (rounded brick) to the opposite corner to win or if you jump on the other players king. If an opposing players piece is landed it's out of the game.

Kingdoms-You have five actions a turn to destroy all the opposing kingdoms. Be the the best kingdom by attacking the kingdom, attacking the soldier, moving, or hiring, rebuilding.

This is a great game to play with anyone and is really fun, addictive and an easy build. The time it takes to play is dependent on how and what you play. I would recommend this game to anyone and everyone. Please help support my creation and tell others about it to. Thank You and remember Build On!