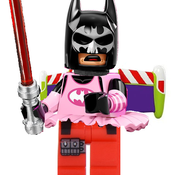 I love sitting at the Rainforest Cafe and looking around at all the animal decorations. Not only that, the structures and the shop are all so rainforest like. In that way it makes you feel, magical! The Rainforest Cafe is a big part of my childhood and I want to share it with the rest of the world.

My favourite character there being Cha! Cha!, he's so cool in the way he's a frog, but he can stand up on two legs. He acts just like a human even though he's not. I love Lego and Rainforest Cafe, so I thought why not put them together.