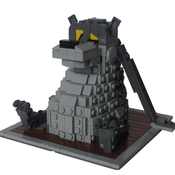 Hello, everybody!
Let me introduce my "The Nutcracker" project.
The Nutcracker and the Mouse King is a story written in 1816 by E. T. A. Hoffmann in which young Marie Stahlbaum's favorite Christmas toy, the Nutcracker, comes alive and, after defeating the evil Mouse King in battle, whisks her away to a magical kingdom populated by dolls.

In 1892, the Russian composer Pyotr Ilyich Tchaikovsky and choreographers Marius Petipa and Lev Ivanov turned Alexandre Dumas père's adaptation of the story into the ballet The Nutcracker, which became one of Tchaikovsky's most famous compositions, and perhaps the most popular ballet in the world.

Nutcrackers in the form of wooden carvings of a soldier, knight, king, or other profession have existed since at least the 15th century. Originally one could insert a nut in the big-toothed mouth, press down and thereby crack the nut. Modern nutcrackers in this style serve mostly for decoration, mainly at Christmas time, a season of which they have long been a traditional symbol.

So I decided to create this character of Christmas story with lego.

The nutcracker I have designed is a little cute toy, I think you wold like to have it on your shelf, especially  at Christmas time, so you can vote for the project and share the link with your friends and followers, the project has to reach 10,000 supporters!