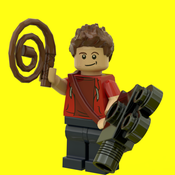 By EPPicstuff
12 comments
From the 2008 movie Indiana Jones and the Kingdom of the Crystal Skull comes a recreation of one of the most infamous scenes of the last 20 years!
I was laying in my bed one night when I thought about it and realized that the only Kingdom of the Crystal Skull LEGO sets were only in the jungle. but there were loads of other scenes they could've made sets for like, maybe a bike chase set, or a hangar set, or maybe even a boom town set- And so I thought, "Oh my gosh I want a boom town set... OH MY GOSH! I want BOOM TOWN set THAT EXPLODES!!! and so I got to work.
This set is a very accurate recreation of the very same house that Indiana Jones went into the movie. since I knew that no one would buy a 100 dollar set for a 3-minute scene, I only included things in the house that we actually saw in the movie to scale it down. so no bedrooms or bathrooms. The set comes with the house, a car, 4 Mannequins, an enemy Russian, and, of course, Indiana Jones.
The main selling point of the set is that it's a house that blows up. If you press down on the brown boards, you'll launch chunks of the house in different directions. I also included a fridge that's big enough to fit Indy in it so he can survive the blast. You can even rip out the shelves as he does in the movie!
Notes: This is a LEGO IDEAS project, and so this is simply an IDEA. I have not tested the launching capabilities since I have not been able to build this in real life, and I currently do not have the parts or money to do so.
I included 2x3 tiles that you would be able to slide into ladder pieces to make selves in the fridge. I used Bricklink's Studio 2.0 to model this set. Unfortunately, the application did not allow me to slide the tiles into the ladder, so I can't show you. But you definitely can! If you have the modified 1x2 ladder piece and any 2x tile, they fir