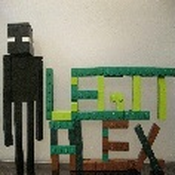 By legitimateal
17 comments
LEGO and Minecraft have always gone hand in hand together in my mind. Anything you could build in one you should be able to do with the other. That's exactly what I have gone for here. A while ago I built a scale version of the Minecraft Chicken in LEGO and shared it with some other people who loved Minecraft. They absolutely fell in love with it. After I shared it with the Internet many people expressed interest in having their own and I obliged them by creating a step by step manual on how to build a LEGO Minecraft Chicken. Many people built their own chicken and shared their creations with me.

The one hitch though that many people had was getting all the pieces together. Many people didn't want to go through the task of getting the bricks from multiple sellers or waiting a long time for shipping. They just want the finished project so they too can have a nifty piece of LEGO/Minecraft ingenuity to show off. That's why I believe this project is perfect for LEGO CUUSOO.

People have already expressed interest in Minecraft in LEGO form. After all, one of the first projects on CUUSOO was a Minecraft set. This creation is not just an imitation of the first Minecraft CUUSOO set like some other projects on CUUSOO are. Instead, it is a model of a very recognizable creature from the series and one of the first animals added to the game. It stands out against the crowd of tiny miniscale figures clogging up CUUSOO. It is sturdy, stands on its own without the need to have a baseplate attached, has poseable wings and is nearly identical to the Minecraft chicken in game.

The build itself is simple and sleek. There are no advanced building techniques used here. The majority of the set is made up of simple 2x4, 2x6 1x6, and 1x8 bricks with some tiles over them to give them a smooth look. The build is easy to make, requires no new molds, has no minifigures to include or printed pieces or stickers, and is under 100 pieces. It works well as a standalone set and should be both cheap to produce and market.

Please take the time to support my project. I have gone through multiple iterations of this model to achieve the best and most efficient version possible and I believe with your support we can add another great set to the LEGO line up.

For more images, you can visit my blog here at www.eightclickbrick.com. I would upload more images here, but I am having major issues with CUUSOO cropping, zooming and resizing them.

Update:
7/18/12: One day after posting and I have 50 supporters. Thanks for the support. Promote this wherever you can.

8/6/12: Minecraft Forum posted the link to my instructions for this chicken on the front page and it appears to have pushed up the supporters to over 100. Thank you all for all of your support! I think I will post a picture of my baby Minecraft chicken tonight.

8/7/12: 250 supporters and counting. Thanks everyone for your support. Keep spreading the word. Remember, if you would like to have this chicken for your own right now, the instructions are on my blog: http://www.eightclickbrick.com/2012/07/lego-minecraft-chicken-instructions..... This includes a break down piece by piece of what you will need.


Clarification: After the outpouring of support I have finally garnered enough attention to also get some critics on my blog and through some messages. I'm thrilled. Here is my response to what some people have been criticizing this build on.

The feet are definitely the biggest problem. True, they do not look like the chicken feet in Minecraft. The chicken feet in Minecraft are literally flat, flatter than I could possibly ever hope to recreate in LEGO. Just by using LEGO and going for the 1:1 scale I have already ruled out the possibility of having flat feet and flat legs (which are also completely flat in game). I do not think this is a bad thing. There are some things that do not translate well into LEGO from Minecraft. or from one medium to another. I chose not to go with the in game feet for two reasons:

1. In order to accomplish the in game Minecraft Chicken feet, I would have to use two layers of plates to achieve the chicken feet. Using two layers would have drawn more attention than I wanted to to the feet because they would be so much thicker than they should be. With the feet option I used, you aren't really drawn towards staring at the feet and the stacked plates don't look 2 plates thick and give the impression of being flat.

There is more, mostly to do with the coloring of the beak but I am not too concerned with it. I'd like to thank everyone for their support so far. This project has really taken off far faster than I would have ever imagined it would.