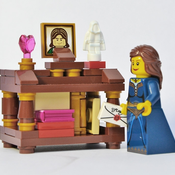 The princess was called Lady Alice, and name of the Knight was Sir Richard. The princess was graceous and beautiful. The knight was courageous and clever. They were happy, respected and loved each other and never quarreled.

A sweet cat, a wise owl, bats in the attic, a fast rat in the kitchen, a brave horse of the Knight and a beautiful Princess's horse also resided in the castle.

The magical Castle was a castle with two towers, with two fireplaces, with one spiral staircase, with the ancient lamps on chains and with real stained-glass windows.

There were many rooms in the castle: a large fireplace hall-dining room, kitchen, bedroom, cabinet, attic and the treasury in the basement.

How to get to the treasury? The secret door is in the floor near the bar, in front of the spiral staircase. The treasury is guarded by a big magical Spider. The Spider catches all the bad robbers who try to steal gold and jewels.

Why did I create this project? Because I believe that children love the mysterious legends of castles with princesses and knights.

Perhaps, after "Castle" their interest in studying the history of that time grow in future. In addition, I believe that the castle will be interesting for all genders and ages. The project includes near 3000 bricks.