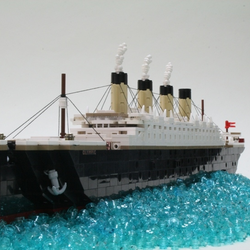 RMS Olympic was Titanic's elder sister ship. Sailing the ocean with the rich and famous for 24 years the Olympic led a long and eventful life. Transformed into a troop ship during World War I she was the only merchant ship to sink a U-boat. In the 1920s she was known as the "Film Star Liner" and made countless trips across the Atlantic. Scrapped in 1935 after the Depression affected trans-atlantic crossings the Olympic was one of the "finest ocean liners ever created".

The Lego RMS Olympic contains 2000 bricks and was built to show my admiration for this world-class ocean liner. Whilst she was overshadowed by the Titanic, the Olympic has her own mystery and tales to tell. With the Lego Olympic you can create a piece of history that would look spectacular in any collection.