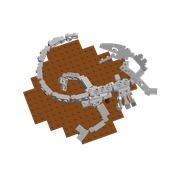 The bigfoot is a large ape rumoured to live in the north American forest It is also known by the name of sasquatch. Some people believe the bigfoot is the same species as the Himilayen yeti.

The loch ness monster is a marine reptile rumoured to live in the enormous loch ness. There have been many sightings of this illusive beast. When it was first sighted it was thought to be a sea serpent. However many now believe it to be a distant relative of the plesiosaur.

The Mongolian death worm is by far the most terrifying of the three. While the bigfoot and Nessie pose no threat to humans the Mongolian death worm does. Rumoured to live deep underground in the Mongolian desert. It has spikes coffering its body razor sharp teeth that are encircled around its entire mouth, Two massive pincers at the end of its tail and the ability to fire acid. It can devour an entire village in one mouthful. However not much proof has been found for its existence. So good for you