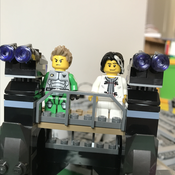 This set is a set based on a comic I made about a magic character called Egibi. It's an adventure/ action comic and the bad guy is Ibige an exact opposite to Egibi. This set is based on Ibiges first encounter with Egibi when Egibi gets stranded on a desert island. Ibige rows up on a small boat and due to the darkness that gives him his power Ibige starts to attack Egibi.

As my first project on LEGO ideas I don't expect it to get much supporters because I'm just experimenting with this and of course l it is missing the sea that is supposed to be surrounding it.