The A Team Van 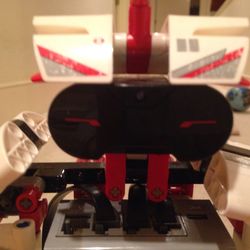 This idea is based on a classic 80's show called The A Team. Featured is their special red, gray, and black van and the full team including Hannibal, Murdock, Face, Triple A, and B.A. Baracus. Each mini-figure would accurately represent a character from the show.

The roof of the van would be removable for easy access to the interior of the vehicle so the mini-figures can be added.