Percy Jackson and the Olympians: The Big House 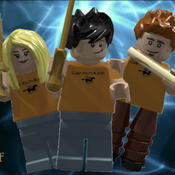 Percy Jackson and the Olympians, if you didn't already know, is a bestselling series by Rick Riordan. It is about a boy called Percy Jackson who discovers that he is the son of Poseidon and goes to Camp Half-Blood, a place where Half-Bloods, or demigods, go to over the summer.

This project is of The Big House, the gigantic house that serves as the main administrative building at Camp Half-Blood. It contains a basement, a rec room, an infirmary, an office, and an attic. When I think of Percy Jackson and the Olympians, I think of Camp Half-Blood, and when I think of Camp Half-Blood, I think of The Big House, and so I thought that it would be a good representation of the entire series, and especially The Lightning Thief. As you can see in the pictures above (remember that you can enlarge the pictures by clicking on them) the house has a main platform and two smaller platforms that connect on either side and can open and close like doors. Each of the stories is detachable for inside play.

For the bottom floor I combined the basement and rec room. The basement contains boxes of ambrosia and nectar and some bottles of strawberry preserves (the camp exports them). The rec room contains the ping pong table, the nacho cheese machine, a hot plate, some chairs, and a cabinet.

The next floor, the infirmary, contains several beds and cabinet sets, along with an Apollo camper healing a nonexistant (I had technical issues) wounded person with ambrosia.

The third floor, Chiron's Office, contains a centaur sized bed, a TV for the orientation video, a boom box, a record player, and a computer that his wheel chair can fit into.

The final floor, the Attic, contains a hydra head, lots of strange vials and containers, dented (well, you can pretend) weapons, and a nonexistant (agin, technical issues) Oracle and stool.

The roof is topped off by a bronze eagle weather vane. I'm sorry, but I could not find a good part for wind chimes that turn into nymphs.

Now for the minifigures!

I have designed figures for Percy, Annabeth, Grover, Luke, and Chiron. Other additional characters such as other campers might be added. I am considering adding Argus, the Oracle, or Mr.D, but I'm not very good at designing figures and I would want to design them well.

As you can see at the main picture, Percy has jeans and a camp jersey. I did not add a bead necklace because I am not the best at that sort of thing, so I just added the Camp Half-Blood logo. He is holding riptide. The set would also include the pen form. Percy's jersey has sleeves as well. I chose this hair instead of Ron's hair, because I thought that this looked cooler and more messy and windswept.

Annabeth, also in the main picture, has the hair used in the Trendsetter minifigure, because I thought it would be good to use that hair in a set, and she is always described as looking like a stereotypical blond. She has a camp jersey and her bronze knife.

For Grover I decided to use the description in the book instead of from the movie. His legs are not poseable, but I think that they look pretty good, but have room for improvement, but LDD is not the best place for that improvement. He has his reed flute, and a camp jersey. Since this is the Lightning Thief, his horns don't show yet.

Luke also has a camp jersey, and his backbiter sword, with one half steel and one half celestial bronze, which I think works in the parameters of the house rules. He has a scar on his face just like in the book.

Chiron is in his wheelchair disguise. I could not make him as a centaur on LDD, as minifigure legs can't fit into very many things on that program and I wanted him to look good if I included him. His wheelchair fits nicely next to the computer.

This is just an idea for what minifgures should be included. This set could easily be expanded into the entire series, and could include characters such as Nico, Thalia, and Tyson, but for now it is just based off of the Lightning Thief, as I am considering making more for other books in the series or maybe Heroes of Olympus, which I believe should remain separate from this. Thanks for viewing!

By the way, if anybody is wondering about my username PEXANDCHIPS, it is after my favourite characters in Artemis Fowl:The Eternity Code.