The Coralskipper, or Yorik-et, as the Yuuzhan Vong called it, was the main starfighter of the Yuuzhan Vong.  Like all Yuuzhan Vong creations, it was grown, not made.  Its weapons were a dovin basal (an organism that could manipulate gravity and produce miniature black holes), two Yaret-Kors (an organism that spat out globs of molten rock at enemy ships), and two plasma shooters on the front of it.  It also used its dovin basal for an engine.  It refueled by eating rocks and asteroids.  Coralskippers also died eventually, because they were living.

My coralskipper has a Yuuzhan Vong pilot minifigure, a hatch on the underside so it can "eat" rocks, and a removable canopy on the ship itself.  The pilot has an amphistaff (snake-like weapon of the Yuuzhan Vong) with him.  The ship has two spring-loaded shooters on the front as well.  To launch the projectiles, push down on the trigger. 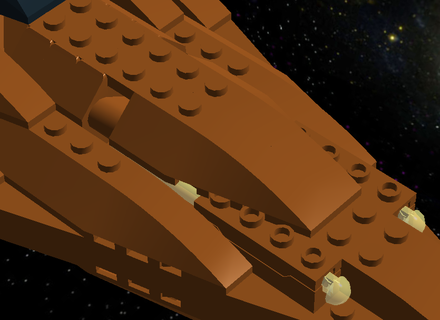 This ship is a very important element of the Yuuzhan Vong fleet, and will go very well with my next few creations. . .