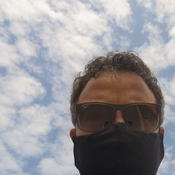 The set that I present, consisting of 881 bricks, represents one of the characters of the animated series the Ice Age - SCRAT-
Specifically, Scrat is depicted trying to retrieve the acorn, positioned beyond a torrent of icy water.
The set consists of the character Scrat; the Acorn and the base depicting a glacial setting.
short presentation of the character:
Scrat is a saber-toothed squirrel, with short, hairy ears, a gray tail with black and brindle stripes, brown fur, obsessed with acorns that lived during the ice ages, trying to keep his precious acorn. He is a character immediately loved by adults and children alike although he had a secondary role in Ice Age, Ice Age: The Meltdown and Ice Age: Dawn of the Dinosaurs, and only later an important role in Ice Age: Continental Drift and Ice Age: Collision Course. Starting in 2013, he became the mascot of Blue Sky Studios.
Scrat constantly searches for his acorn to bury or eat it, but fate always gets in the way. He invariably ends up in humorous or painful situations: being struck by lightning, chased by avalanches, and repeatedly passed out while fighting for his acorn. Yet he never gives up.
Scrat is the main character of four short films. In the first, Gone Nutty loses his acorn collection in a catastrophic chain of events.
Later in time, by mistake, Scrat was responsible for the separation of the continents, which divided Pangea, the singular continental mass, into various continents. After this, Scrat found himself a paradise on Earth: an island populated by advanced saber-toothed squirrels known as Scratlantis. After finding it, however, Scrat sank it by mistake, stranded in a North American desert.
After sinking Scratlantis, Scrat wonders across the landscape with a new acorn in his hand. He ended up falling through the ice into a cave. There, he ended up finding a place to finally store his acorn. Apparently, his acorn ended up powering a UFO encased in ice.
Today's set could be quite successful as the character was very likeable and loved all over the world.