Neil Made It To The Moon 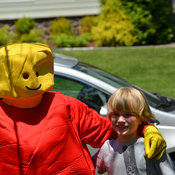 "Lego History - Neil Makes it to the Moon"

I want to put together a product line called "Lego History"  I have come up with a list of builds I want to make.  At this point I have sent in a few emails to Lego and wrote them a letter.  I have now taken my ideas and put them into the real Lego world. I am also working on "Lego History - Paul Revere and the Midnight Ride", "Lego History - Ben Franklin's Lightning Rod", "Lego History - Rosa Parks Gets A Good Seat", "Lego History - Battle of Bunker Hill"  These are all working titles, and there are many more.    I have already build 3 of them, working on them in LDD too. This is my first Lego Idea hopefully of many

"Neil Makes is to the Moon" is made up primarily of all generic pieces.   This would not be a complicated build for anyone.  It is one of my first builds and I look forward to the support of the community.  I do not have any expectations.  Would be nice just to hear a few comments and get a few votes

Neil was a very shy boy.  His parents tried to persuade him to play sports and be social with friends at school.  But Neil was a smart kid who enjoyed science and making experiments.  One day while watching TV, Neil saw a show on space exploration and has never been the same.  He spent the rest of his school years studying to be the best astronaut he can be. So today we celebrate as Neil made it to space.

An American Icon.  Deserves to be a lego set