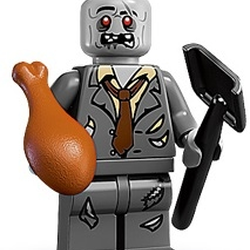 For almost hundred years by now, jackhammers (also known as pneumatic drills) are used in road repairing. This tool was invented by Charles Brady King and helps to brake up asphalt concrete and so forth. Compressor from this set copies a real one from 1930's photo.

How does it work? Lets ask Chris Woodford and Explainthatstaff. com :

"In fact, the only energy involved in making a jackhammer pound up and down is supplied from an air hose. The hose, which has to be made of especially thick plastic, carries high-pressure air (typically 10 times higher pressure than the air around us) from a separate air-compressor unit powered by a diesel engine. The air compressor is a bit like a giant bicycle pump that never stops blowing air. When the worker presses down on the handle, air pumps from the compressor into the jackhammer through a valve on one side. Inside the hammer, there's a circuit of air tubes, a heavy piledriver, and a drill bit at the bottom. First, the high-pressure air flows one way round the circuit, forcing the piledriver down so it pounds into the drill bit, smashing it into the ground. A valve inside the tube network then flips over, causing the air to circulate in the opposite direction. Now the piledriver moves back upward, so the drill bit relaxes from the ground. A short time later, the valve flips over again and the whole process repeats"

Must have for any Lego City road repairing team!