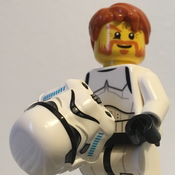 Any Star Wars fan will recognise this iconic vehicle from the film 'The Empire Strikes Back'. It appears in the famous 'Battle of Hoth' and is used by the Rebels to take down the Imperial AT AT walkers.

Lego have a standard playable set of this as well as a discontinued UCS model. However, I wanted to create a detailed film accurate UCS model at minifig scale which I think will appeal to Star Wars UCS collectors like myself. This model is for display only and not designed as a playable set.

This was a very challenging build due to the size and in keeping with minifig scale. The front area proved to be very difficult to build due to the unusual shape. Like other Star Wars models I have created, the cockpit was also difficult to create and therefore had to be fixed and not movable. The back bottom flaps are movable but unfortunately I was not able to incorporate the top flaps. To achieve this would have meant a less accurate model. The model went through a number of rebuilds before I achieved a satisfied recreation of the film version.

I'm pleased with the outcome and I hope others will like this version of the classic Star Wars vehicle also.