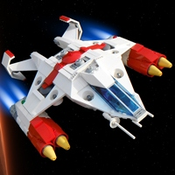 The Nasal Avenger is the trusty, nose-shaped spaceship of Captain Kosmo. With his rag-tag crew of intergalactic misfits, the intrepid Captain Kosmo journeys through outer space in search of new adventures!

This unique and comical looking LEGO spaceship is lightly yet sturdily built and is loaded with many playable features such as:

The crew consists of Captain Kosmo, his trusty 1st mate Rolf, Micki the ship's mechanic, Xeno the alien science wiz, and Ziggy the pet pig and ship's mascot. These silly characters and their nose-shaped spaceship are inspired by a comic strip I created during my college years for the simple amusement of family and friends. Years later, the comic evolved into LEGO stories that I shared with the online AFOL (Adult Fan of LEGO) community and essentially took on a life of their own.

Rather than propose a LEGO set based on existing intellectual properties to be licensed, or on real-world constructs, I thought it would be fun and interesting to put forth something totally zany and original that came from within the LEGO fan community. I designed this model of the Nasal Avenger with child playability in mind and with aesthetic elements that leave it open-ended in terms of belonging to any particular existing sci-fi universe. I left room for further refinement of this design with unique LEGO parts and colors not available when I initially designed it. When it comes to the IDEAS line, I believe the strong point is not only offering interesting LEGO sets for children, adult builders or collectors, but also introducing new parts that further expand a LEGO builder's palette and inspire more innovation and customization with LEGO creations.

Even if this idea does not make it through the selection process it is my pleasure to share it here with the LEGO community.