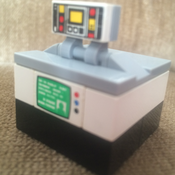 One of my favorite Christmas movies is “Home Alone”.
This full scale set of the McCallister house has all the rooms with the traps Kevin used to defend his home from Marv and Harry.  It comes with 3 mini-figures; Kevin, Marv and Harry.  I also included the hairy spider.

On the front door is the hot handle to burn Harry’s hand and the icy steps.

The mini-figures: Kevin with the BB gun, Marv with crow-bar, and Harry and his hat.

The McCallister home including the tree house with the zip-line.

The back door where the adventure begins.

The house can come apart in three pieces so more of the rooms can be accessed.

In the basement Harry gets hit in the face with an iron, climbs the tar steps, steps on the nail, and falls back into the basement.

Coming in the back door Harry gets his head burned by a mini flame thrower.

My favorite scene in the movie is when Kevin throws the paint cans at Marv and Harry, after they had just slipped on the toy cars.   Upstairs Kevin put the hairy spider on Marv’s face.

Then for excitement Kevin is sliding down the zip-line.

Kevin arrives at the tree house and cuts the zip line.  Causing Marv and Harry to crash into the
house.

It think this set would be a great addition to the Lego products for kids young and old to enjoy the comedy of “Home Alone” brick style.  Celebrating it’s 25th Anniversary.