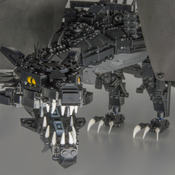 My inspiration for creating this huge dragon, was of course the dragon Smaug from The Hobbit: The Desolation of Smaug. I attempted to make it look just like Smaug, but because of the lack of Lego bricks available to me, I had to change parts of it in order to make it look good (such as the head). If it were approved, then Lego could either make it its own set, or redesign it so that it would look like Smaug. Finally after much hard work, and the help of my brothers, this model was completed in early March of 2014, and has been sitting in our house as a cool decoration ever since.

The Dimensions of this model are:

This model includes locks on the neck joints, locks on the legs for flying position, and wings that can fold with locks on the joints, which allows you to be able to set it up in flying position or in standing position. If it were to become a set, all it would need are stronger joint pieces so that there would be no need for the locks, which would make it easier and more fun to play with. The different sections of this model including the tail, wings, neck, and head can be easily disconnected from the body for better transportation and/or storage.

It would be great if this Lego model would be made into a Lego set. Just think how awesome a giant Lego dragon (or Smaug) would be!

Feel free to leave me a comment and thank you for your support!