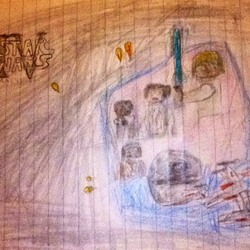 A long time ago in a galaxy far far away, two bounty hunters named Zam Wessel and Jango Fett are trying to hunt down Senator Padme Amidala. And it is to Obi Wan and Anakin protect her. Later on that night, Zam Wessel tried to break in the hotel. But, she was caught by Obi Wan Kenobi. So, Anakin and Obi Wan chased her by air-speeder. Help them capture Zam Wessel before it is too late. This set come with eight mini-figures with accessories, and two air-speeders.