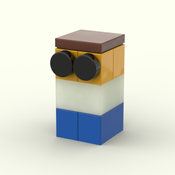 Prague. Have you ever been there? Well, with this LEGO set it doesn’t matter, but probably every tourist must admit this city offers a really famous history and historical monuments. This is the reason, why I decided to build a model of Prague dominant - Prague castle. This castle is the largest still inhabited castle in the world (7.28 ha) and is located on the left bank of the Vltava river. Its history dates back deep to the 9th Century AD. There are four courtyards and, what is very interesting, we can find almost all the architectural styles used since 1000 AD there. The castle is inhabited by the current president of the Czech Republic.

The model itself consists of 1328 bricks, is 50 studs long and 18 studs wide (in real 570 x 128m). It took me about 1.5 months to build the model. Building technique wasn’t easy at all, because the whole castle is reduced a lot and the current LEGO bricks do not allow me to build such details I would need.

I built it, because I’m a proud Czech and I know that Czech monuments are very often neglected compared to the world ones. Nevertheless, they are also historically valuable and beautiful!

I believe it would be a beautiful LEGO set placed on a shelf for those, who like to reminisce about their trip to Prague, but also for the Czech inhabitants as their favorite dominant could be brought home from a LEGO shop.