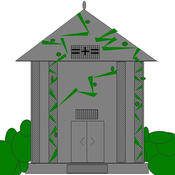 This is my idea for a mini Cloud Cuckoo-land. I'm not a real fan of Cloud Cuckoo-land,(being a boy) but I thought it would be cool to make a mini version anyway. The project comes in 3 parts, the base, unikitty and Cloud Cuckoo-land. The base was inspired by the lego star wars sets that include a ship and a planet. I've done my best to make unikitty, but being on Ldd, I can't make the details, so have left that to lego if this becomes a set. I tried to make mini versions of some of the main parts of the Cloud Cuckoo-land landscape, including the 'Dog' Cloud Cuckoo-land palace, the giant eye, the giant bird and the giant worm-like thing. Thanks for looking at my project and please support, I will be submitting more boyish projects soon, bye!