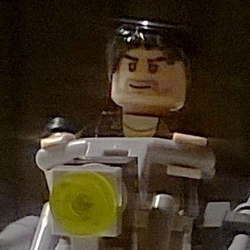 The history of this project began when we were going to go out of town for the summer. The son asked me to bring a Lego to play there. I wanted his ninjas to find themselves some kind of peaceful occupation, so the idea of ​​sending them to the expedition seemed good to me!

It was necessary to have old school transport, but the search for ready models on the Internet did not give a result - in this scale the cars are very small. So I decided to build it myself. I chose between Land Rover Defender and Toyota FJ. But in Japan (and I suppose the ninja from there), the second one should be more popular.

The result is in front of you. Toyota FJ 45, 1982 of release. Found on a scrap heap of parents, carefully restored by Jay and prepared for new adventures!