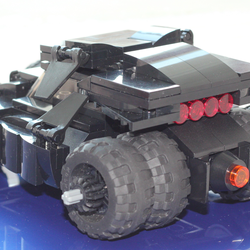 AC Cobra in a mini scale.

AC Cobra - British sports car, manufactured by AC Cars from 1961 to 1967. Since the late 1980s, Carroll Shelby and Shelby Automobiles, Inc. have continued to produce Cobra cars called Shelby Cobra FIA 289 and Shelby Cobra 427 S/C at their plant in Las Vegas, Nevada. These cars retained the overall style and appearance of the original from 1960s.

The project is executed in mini format, smaller than the usual scale of the Lego City series. It seems to me that the set will be interesting of Lego fans.

Thanks you for attention.