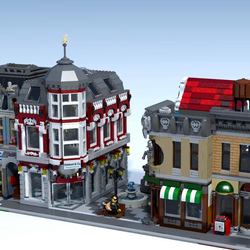 Dear friends!
Do you like stories about secret rooms, hidden maps, the secret signs, clues and ancient treasures?
Ok. I'll tell you such a story.
Once upon a time a famous architect lived in LEGO city. He was fabulously rich and famous. But he had left a very strange testament after his death.
The old architect's testament says architect hid all his gold and jewels.  He gave the map and the key to the treasure to Admiral Von Bricker, his friend.
It seems that everything is simple. But the admiral died 10 years before the architect wrote his testament. Therefore, it was impossible to ask the Admiral, where is the architect's treasure hidden?
People say that the treasure has not been found yet.
Maybe you can find them, good luck!

Yes. This is not an ordinary modular set. This is a very playable set with several secret places with clues which lead to treasures.

And I made a little comic about a treasure hunt in this modular project:

Thank you for supporting!