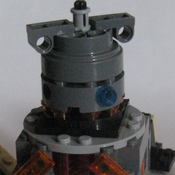 This LEGO is the guardian that we see in the video game: Zelda - Breath of the wild. It corresponds to the goalkeeper who can move. It has 6 legs that move vertically with 3 joints and can also move 4 legs horizontally 180 °. The set comes alive as in the game, it is possible with a series of photos to make the same fluidity of movement ... In addition to this feature, the body of the guardian can turn 360 ° and his head.

The idea of ​​building this LEGO came from my son watching me play:
- Dad, he is too good the guardian I love the colors and how it works, we can do it in LEGO?

This LEGO can be an excelent set LEGO because it is made only with bricks of the series "city" so for all ages from 5 to 120 years ... It does not require a lot of bricks, in the end, it is easy to assemble. Finally, it's one of the most impressive characters in the most recent video games, having it in LEGO is great