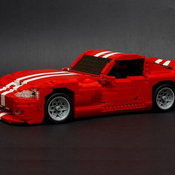 The Dodge Viper GTS was released in 1996 as the second generation of this iconic American supercar.  Though the body design was similar to the first generation some major improvements were made such as increased engine output, weight reduction, stronger chassis rigidity and more interior human luxuries.  It was strictly made as a hard top coupe, and some models included dual racing stripes of various colors.

Though I always had a strong liking of this car as I grew up, the idea to build one only came to me after seeing the Ferrari F40 in LEGO designed by Michael Psiaki released summer 2015 to the shelves.  I had just completed a 50,000+ piece LEGO castle and was looking to build something smaller as my next project.  In August I purchased two of the F40 sets as parts packs to begin the project.  I wanted to include as much detail as possible while keeping the total size reasonable for this project to be considered by the Lego design team should I reach 10,000 supporters.

Starting the last week of August my Viper project began with numerous searches for pictures, information and specifications.  I spent countless hours reading throughout the build to familiarize myself with the car.  I did not use LEGO Digital Designer, rather I built along side many vehicle pictures while ordering from Bricklink pieces I would need along the way.  The car was built from the rear forward and completed the first week of December.

For More pictures and information: