By SenatorBlutarsky
15 comments
A few years ago I had the chance to visit LEGOLand California. Just like all of the other LEGOLand parks, one of the main attractions there is MiniLand. All of the displays in MiniLand are great, but one that really caught my attention was the New England Fishing Village (perhaps because it covered a subject near to where I live).

Time has passed, and I'm not even sure whether that exhibit still exists, but I have always thought that a fishing village would be a great subject for a LEGO model. What I
have done with this project is to put a slightly different spin on the idea of a New England Fishing Village -- a miniaturized and modernized version. This model is built at an approximate scale of 1 stud = 1 meter (i.e. 1:125). The scale is close to the one used in the Mini Modular set, but I would hestitate to call this set "modular" -- there isn't really any intent to link it up to other sets and, unlike the Mini Modular set, this set actually has a decent amount of playability,

The buildings and boats included are more typical of what you would see today, as opposed to the early 20th century timeframe that the LEGOLand display appeared to have been based on.

So, what's included in this set? Well, let's start off with the fishing vessels themselves. At the larger pier there is a 72-foot (22 meter) longliner (those of you who are familiar with my other projects might recognize it ;-). Docked next to the longliner is an 82-foot (25 meter) stern trawler. At the smaller pier are a pair of 32-foot (10 meter) lobster boats, which are pretty much ubiquitous on the coast of Maine. Given the model scale, the vessels are all exactly as large as you would expect -- the longliner is 22 studs long, the stern trawler is 25 studs long, and the lobster boats are each 10 studs long.

Both the longliner and the trawler are equipped with functional stabilizing anchor masts, and both have some variant of a fishing mast as well. The longliner has a typical complement of line reels and buoys, while the trawler is fitted out with two large net drums and a winch on the port side. The longliner has a fairly straight hull, while the trawler has a tapered stern with stiffening ribs along the sides. Both ships are mounted with modern navigational equipment, which can be seen atop the pilot houses.

The piers lead back to a rocky coast (typical of northern New England). Between the piers is a small man-made promontory that is home to a statue of a fisherman -- a small tribute to the Gloucester Fisherman's Memorial Monument. On the narrow street just behind the seawall, a fire engine is parked with its ladder raised. Along the opposite side of the street are several buildings, including (from right to left):

* A two-story building with a pub on the first floor and living space on the
second floor).

* A wharf with a warehouse for a marine outfitter / fish exchange operation. There are two cranes on the wharf to aid in off-loading the ships and installing equipment. Parked next to the warehouse is a small mobile crane.

The picture below shows another view of the entire village, with the warehouse and lobster shack in the foreground. From this angle, you can see the mini mobile crane parked next to the warehouse. 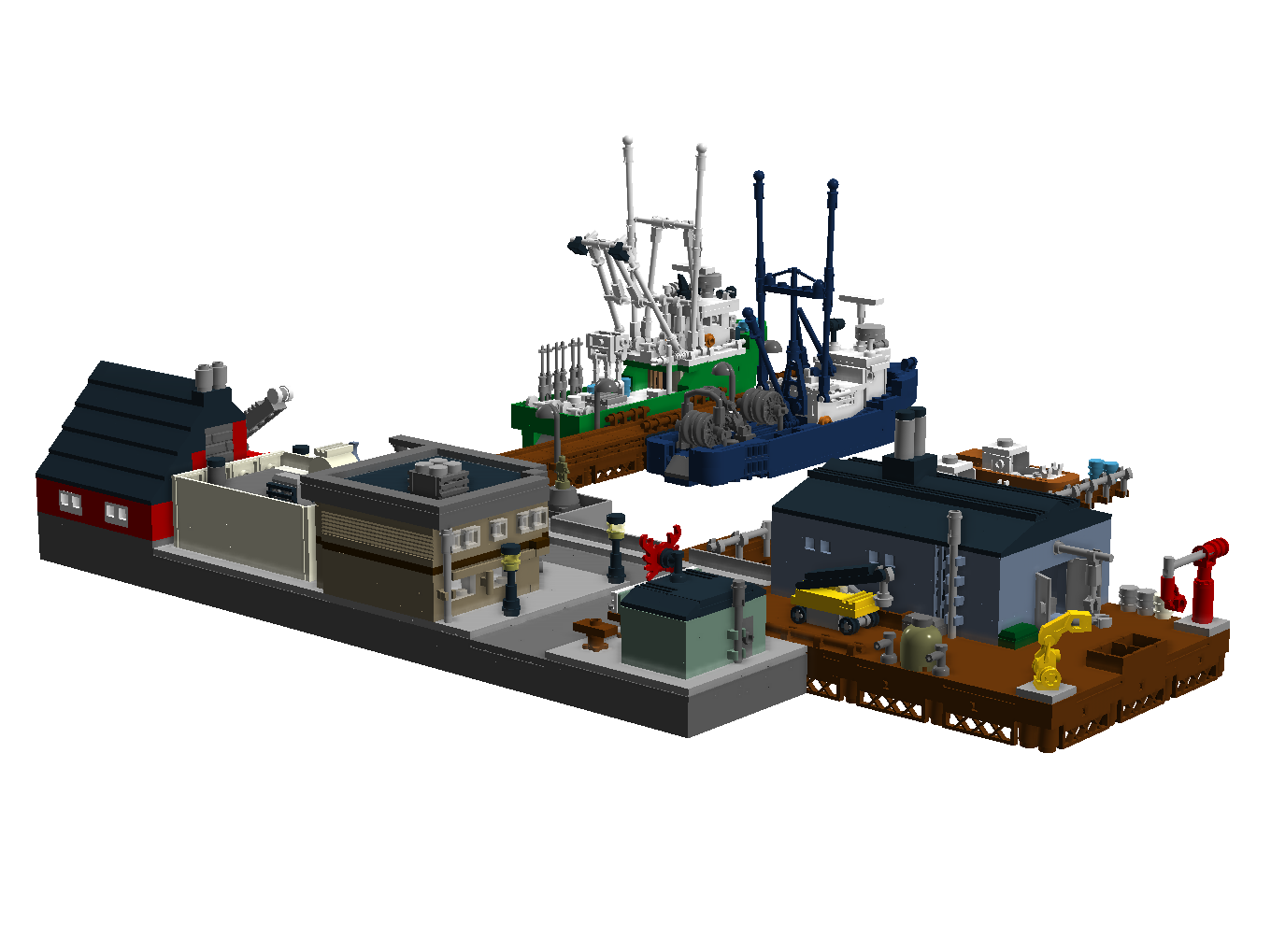 The next picture shows a closer look at the other three buildings in the village -- the pub/aparment building, the fish market, and the saltbox colonial. 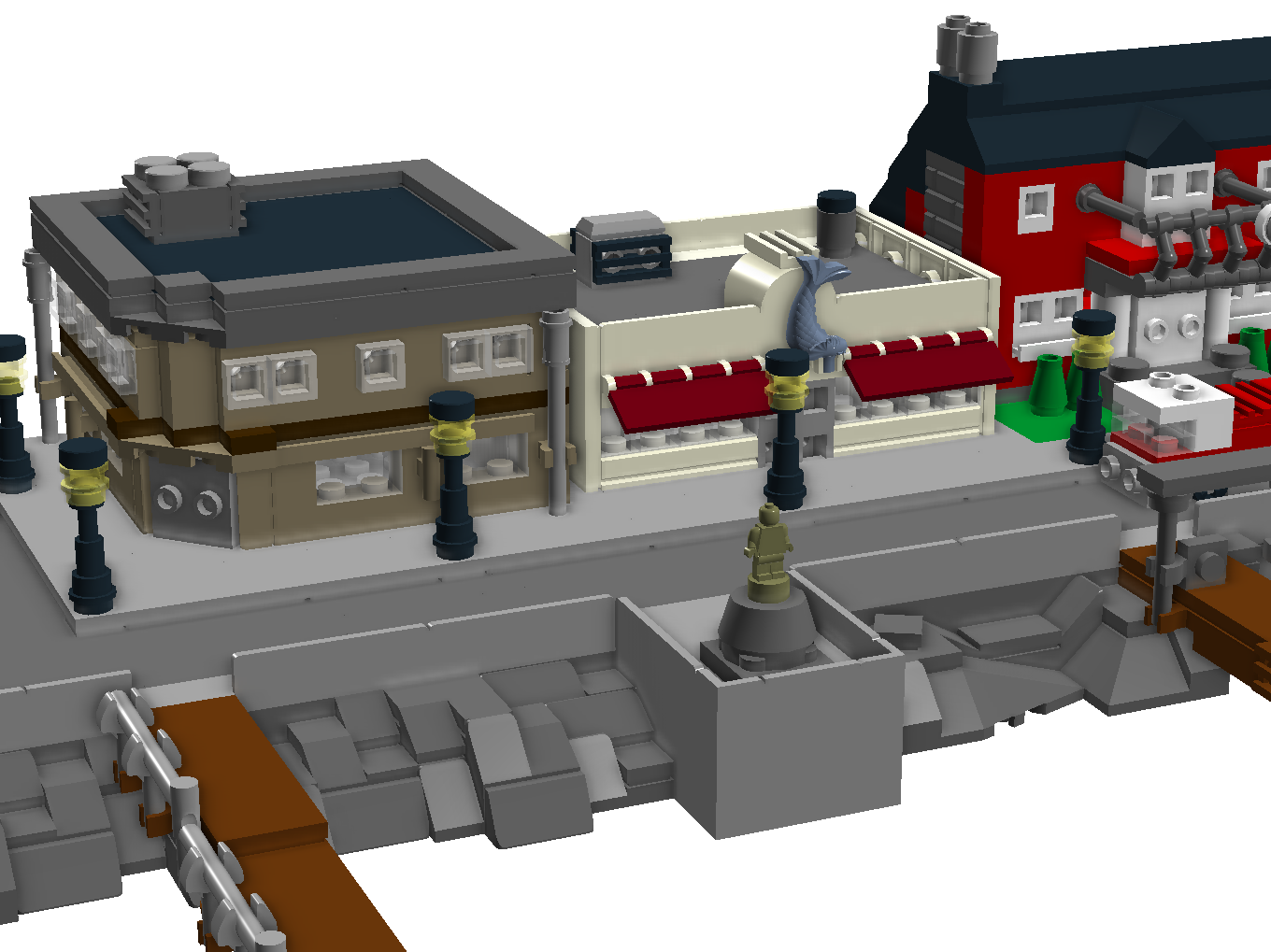 The next picture is a view of the entire village from the other end, showing a better view of the longliner, the parked fire engine, and the saltbox colonial. 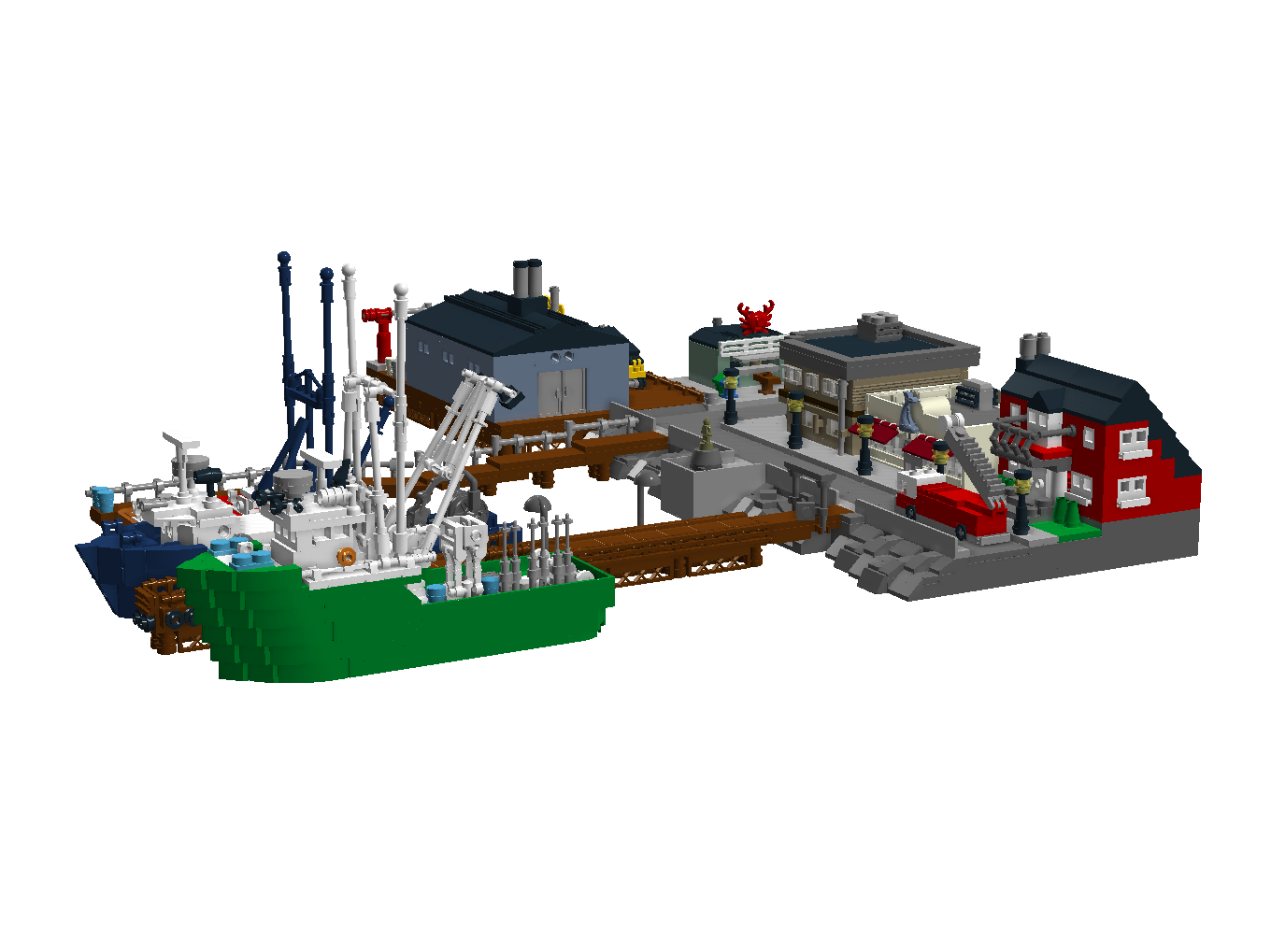 In the last picture, we see the longliner and the stern trawler heading out to sea, anchor masts down and ready for the rough seas ahead. 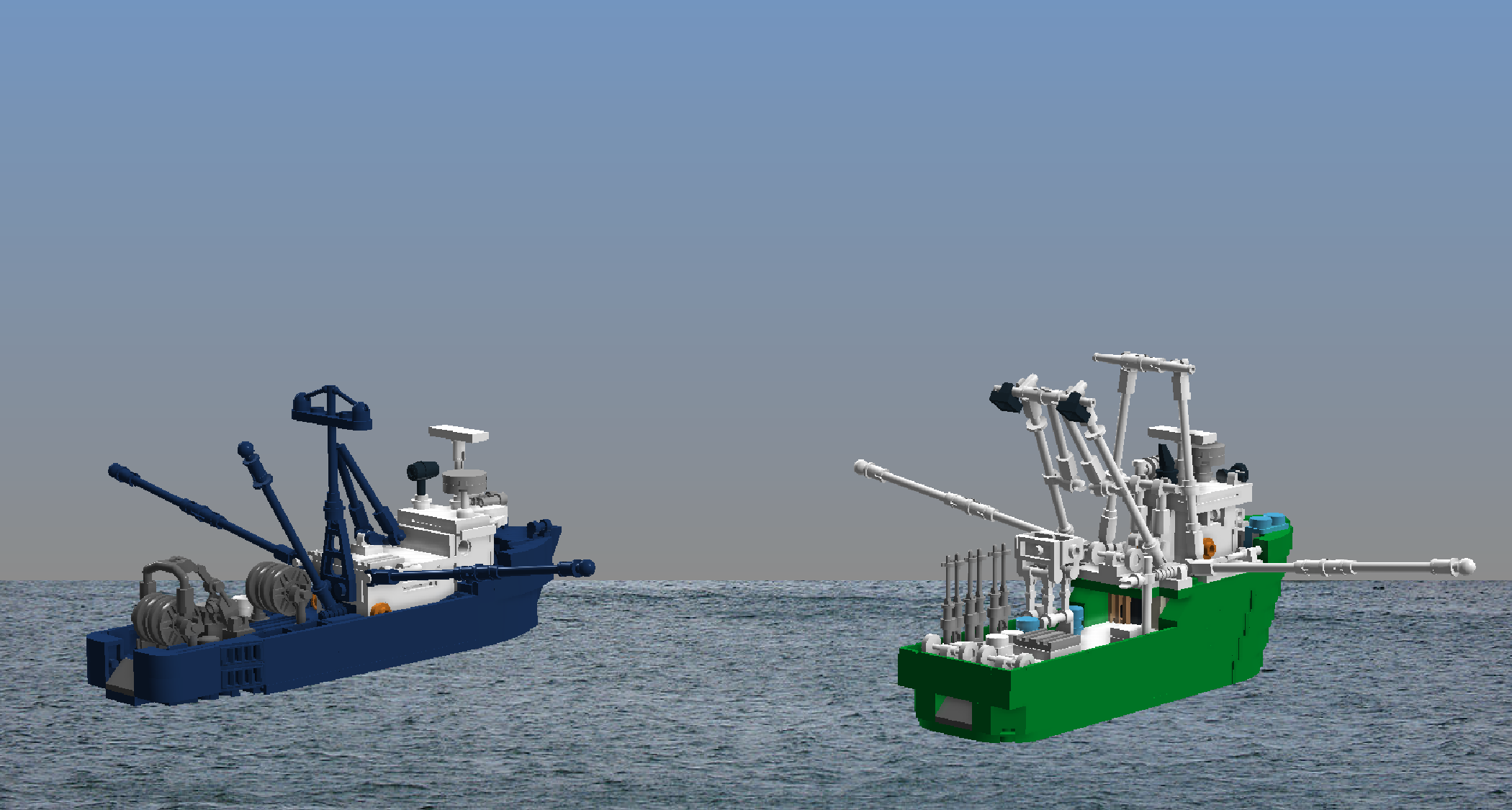 If you like this project, you might also like some of my other projects, including:
F/V Andrea Gail
UCS Double-Ended Ferry
Busy Micro Seaport
Apollo-Soyuz Mission
Superheavy Multi-Axle Transport Rig.