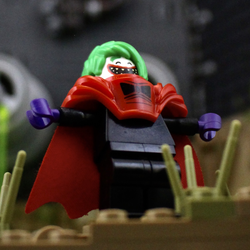 The building itself is about two stories tall, and is a very fun interesting build. The walls have a striped color scheme, and there are large windows and decorations in the front and back of the building. Inside, there is a hallway with paintings, banners, and a flower pot directly through the opening front doors. To the left, there is a ticket booth, bathroom, and stairs up to the higher levels of seating in the building. To the right in the hallway, there is a door to the lower levels of seats. In the theater, there are four rows of detailed maroon colored seats that fit a minifigure. The stage has maroon curtains hanging on the edges, and slots to put backdrops in behind the curtains. The set only comes with one maroon curtain background, so there is space for you to make your own. Maybe a castle, or a farm on a hill? You decide! Five minifigures are included in this set. Two actors (a knight and a princess), two play viewers, and one theater worker/ ticket seller.