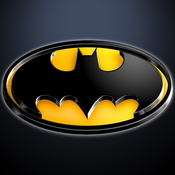 Inspired by the Lamborghini Egoista design where car and plane come together, here is a flying Batmobile for the Caped Crusader. There have been many instances of flight capable Batmobiles in the comics and I believe this would be a popular toy with a number of playable features.

In Flight mode, the wings are pulled down with stabilizers in the front and wings in the middle that align with the side spoilers for a larger wing area. With the wings down, there are guns that can be unfolded out from the side intake area that give this a more menacing look. There are also two spring loaded missiles in the front nose that can be launched from the cockpit that work equally as well in the air or on the ground and two front mounted guns above the large air intakes.

In Car mode, the trunk lid has a collapsible cannon for surface to air defense and a swiveling grappling hook gun with rope for some added fun. The rope is attached to the floor of the trunk and can easily be pulled back in after using the hook. There is also room in the trunk to keep some batarangs or handcuffs, which I find is always appreciated to keep track of the smaller parts with the model. The rear has two smoke emitter nozzles above the jets and two hidden flash grenades canisters that pop off with a quick flick of the finger. This particular model has working headlights recessed deeply in the huge air intakes as well as light up jet exhaust nozzles. I believe it would be a great selling feature to have the light up jet exhaust especially, but this can be omitted if needed.

The interior has seating for two in a fighter cockpit style to match the aircraft theme. Inside there are two monitors for Robin's use, one for targeting and another for the batcomputer. Batman has a dual holographic displays around him as well as a fun infrared picture of the road built into the windshield. The windshield actually locks in place with the trunk and opens fully to allow the minifigs to be placed easily.

In summary, I believe this would be a welcome addition to the ever growing line of LEGO Batmobiles and would be an enjoyable product for all.