Adventures of the Ninja Knight 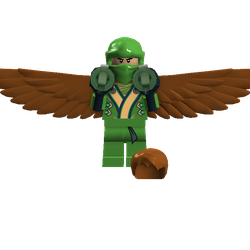 The realm is under attack by the evil Troll King and his skeleton minion, Moe Hawk. It's Ninja Knight Joe to the rescue in his flying fortress! With an arsenal of 4 spring-loaded shooters, 4 stud shooters, 2 katanas, 1 rapid-fire stud shooter, 1 axe, and 2 shurikens, this is sure to be one epic battle. Includes Joe G'unn, Moe Hawk, and the Troll King. With 135 pieces making an Airjitzu-looking command ship and gunsled, let's see who wins!