There is only 1 day left till Lego Pueblo is going to be archived. So it is clear this project will not reach the next milestone of 5000 supporters.

I would like to use the opportunity to thank all the supporters and also all those who have left a comment. It was a quite inspiring journey and led to a lot of changes to Lego Pueblo. It started as a 3in1 modular Creator set and ended as a 4in1 modular Creator set. Further changes arose out of your suggestions (example Minifigs, trader and so on). Lego Pueblo changed a lot during last year.

Due to these changes (and due to some errors I made when posting Lego Pueblo), I decided that I will give this project another try. This way it will be a finished project right from the start. When? I will have Lego Pueblo online between 26 of February and 3rd of March.

To all the supporters and followers:

Pleaaaase check in to Lego Ideas at that period and give your vote again to Lego Pueblo during the first week. This will be very important to get a good start.

Thanks again to all of you!

See you end of February/beginning of March

With so many updates improving Lego Pueblo with your help, I thought it might be a good idea to have one update showing the final version of  Lego Pueblo. This way you know what exactly you are voting for. We have time till beginning of February to make it to 5000. So here you go:

The set consists of approx. 1800 bricks and features the basis version, let us call it The Craft. You build The Craft and there are no left overs in the set. Here it is: 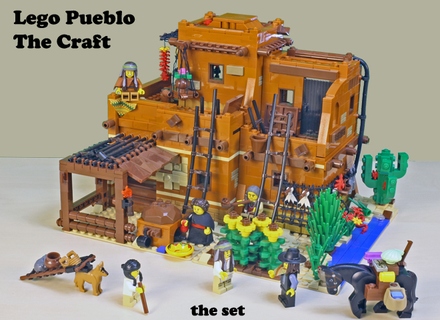 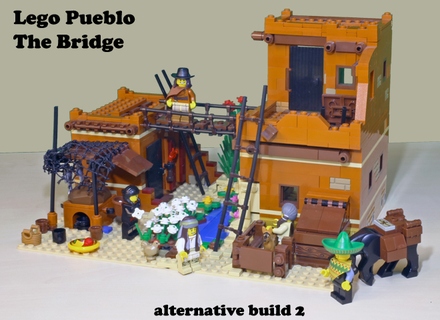 or you can build The Patio 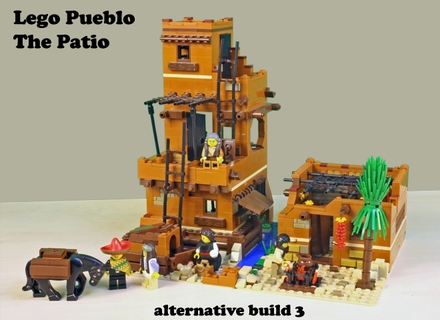 or you choose to build The Tower. 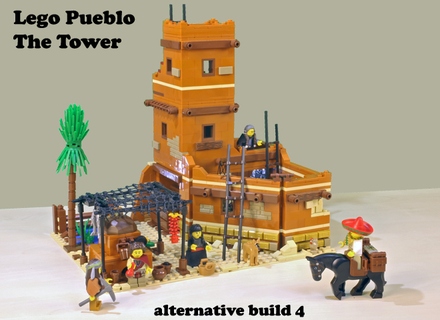 Rearrangement of an Alternative

Since most of the buildings (except The Tower) consist of two dwellings attached by pins, you could also rearrange each individual setting. To show an example here is The Bridge with a rearranged setting: 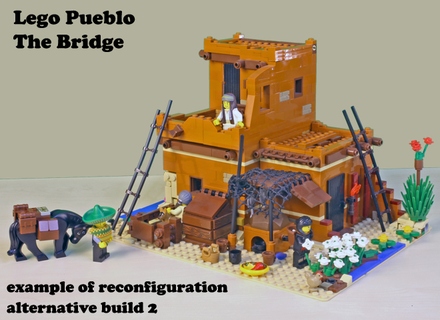 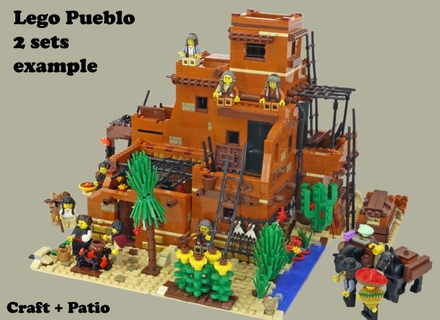 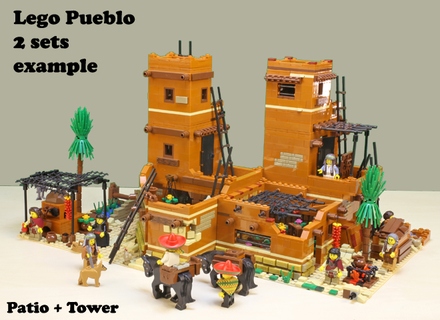 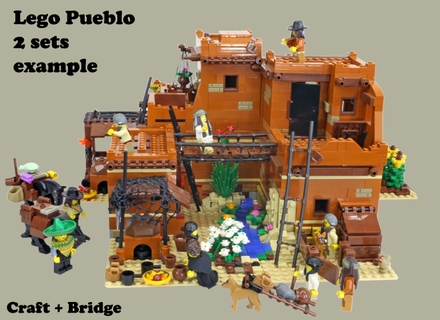 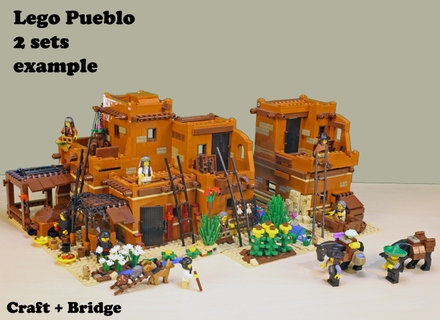 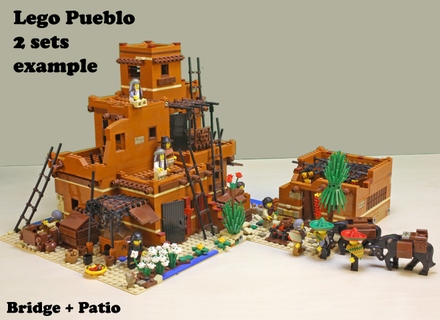 Three and four times the set

Having the set 3 times or 4 times not only enlarges your Pueblo, but leads to more possibilities of arranging and rearranging the dwellings. Here an example for 3 times and one for 4 times the set: 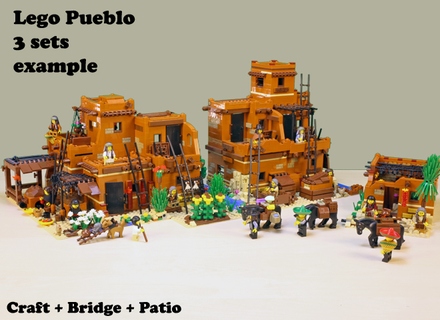 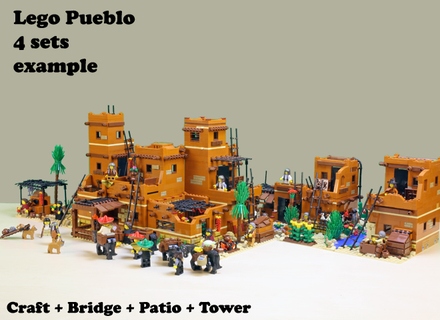 This is it. If you would like to see this as a set, vote for it and tell everybody about it. There is not much time to make it to 5000 in order to go for the next step.

Thanks for the support

Maybe you like Lego Pueblo at night. Still much going on there... 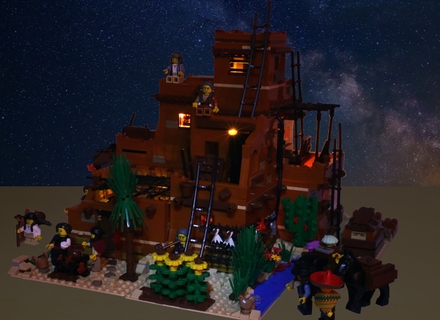 The party is over and the Lego Pueblo tribe is about to go to bed. The last sunrays warm the walls of the dwellings.

Have a good rest. 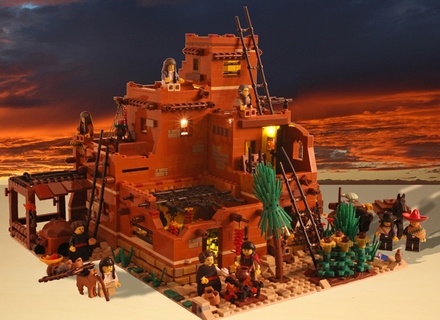 The pic of the sunset is one I took from my balcony last year. Normally the sunsets do not look as intense, but that one day was awesome.

And so do I 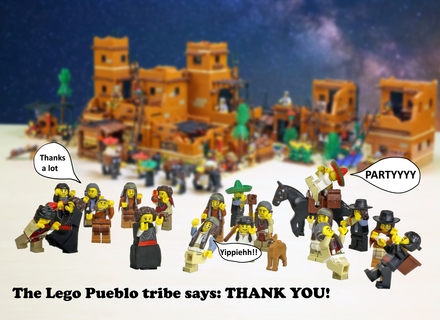 I managed to cut and edit the video presentation for The Tower set but I could not upload it on YouTube prior to my family holidays. Now I am back and here I go with the next video. Remember the hammock is a traded good (in order to remain accurate and add a bit of fun to the set). Hope you like it.

Next video will be "The Patio" which will be more of a dia show rather than a video presentation. While filming all of the Pueblo alternative builds (in one evening) I got too tired in the middle of the night so I want to spare the video of The Patio.

here I go with the next update, this time featuring "The Bridge". I think these videos are quite good to show the buildings from every possible angle. This way you really get to see it. Furthermore I am able to better show you the possibilities of the set.

I would like to comment what Ricardobart said a few days ago. I quote:  "Even if it doesn't get the necessary votes, Lego should keep an eye on this!". Well, I do not know how Lego could keep an eye on it if it doesn't get the votes, but the comment made me think. Is this proposal not mainstream enough? Then I had this funny idea how to turn it into a "mainstream-idea": Delete the trader and add a UFO with an alien in order to reflect the ancient aliens theory from the history channel and there you go. Personnally I think this idea would be funny, but I'd rather stay with the trader. What is your opinion?

Thanks for supporting. See you in next update featuring the patio.

I just wanted to post the You Tube video I made. It's about the presentation of the Basis Set. With the bricks in this set you could build all the other alternatives according to instructions.

By the way, if you have some time check out this proposal. It is about a small space ship that catches the spirit of classic space. Very nice.

first a picture of four Leego Pueblo sets together: 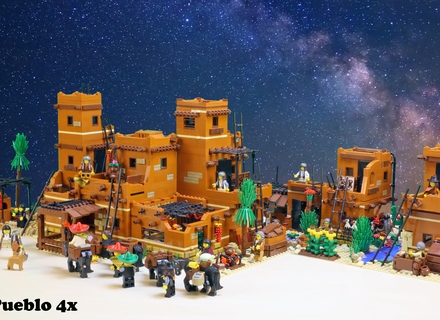 finally I am ready with my first video presentation in which I would like to show the concept behind Lego Pueblo. Not much to say, just follow the You Tube link. Hope you like it. Thx for the support up to now.

Next video presentation is the basic set (which I need to upload on You Tube first).

Agriculture is very important to Pueblo people. Numerous plants were grown. Since I could not include a dozen plant possibilities in one single set, again I used the 3in1 or 4in1 concept for plants as well. By getting more sets the plants can be combined and even small plantations are possible. Important is variety!

But first some words to the cactus which has brought me some critique as the Saguaro does not exist in the Pueblo area. I would say the “current” Pueblo area. But what about the past? There are many Pueblo ruins scattered around. Maybe there was Pueblo at lower altitudes with Saguaro nearby?

Admitted, I would have liked a Prickly Pear Cactus, but that was not possible with the bricks. I personally would love to have a cactus in the set, as it adds a lot to the variety and to the design. Besides, those who prefer an accurate current Pueblo can leave the cactus aside and build the Yucca instead. If there would be no cactus those who want the cactus won’t have it.

The cactus is built in such way that you can make different sizes of cactus, from small to medium, large and even very large. You can turn part of the cactus so it gets a more “chaotic” look. Here some pictures: 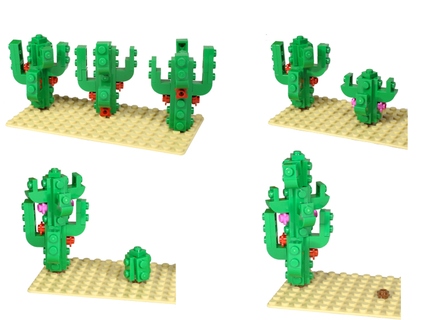 My suggestion would be, leave the decision to the Lego company. If this set gets to 10000, they could ask Pueblo people and/or archeologists to decide cactus or no cactus. Here is a picture of part of the set with the cactus and one without the cactus: 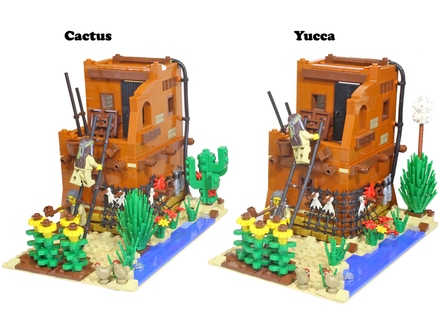 Using the bricks in different ways can bring you different plants.

The single bush in the main set is composed of the two different variants of Lego bush. By combining sets you have different looks of bush. That adds to a diversified landscape.

A bush combined with some bricks make a Yucca plant in different sizes and different styles possible. The curved look of bigger sized Yucca is possible with a rigid hose inside (adds to stability in spite of curving). Take a look at the first row of pics (the great plain Indian is just for size comparison). 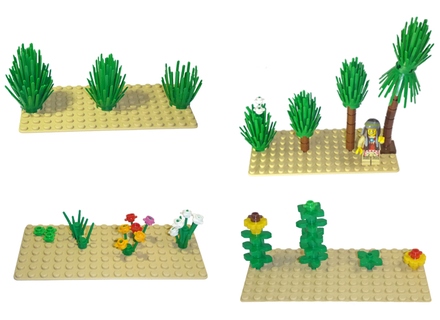 Moss can become flowers if used in combination with grass. Flowers in different colors are possible if the pieces of “textile” from the weaver are used. You can combine grass and white flowers/textile pieces and make cotton plants or even small plantations.

You can combine different sized Yucca plants that offer a bit of shadow in the burning mid-day sun. Sleep well José. 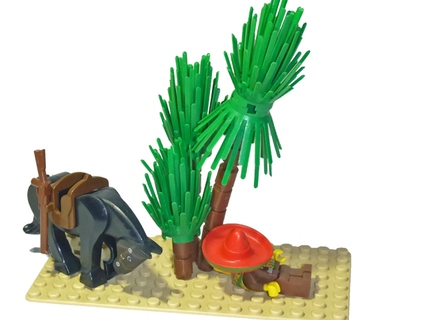 Thanks for helping Lego Pueblo reach the people.