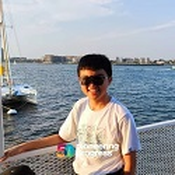 The Motorized Aerial Tramway, a unique Lego model that really moves and stay in the air.

It is built with 698 original LEGO bricks, and carefully capture the details of a real life aerial tramway.

Few years ago, my family and I went for a vacation. One of the tourist attractions is separated by the sea. We decided to take the aerial tramway which none of us ever tried before. The view in the aerial tramway is spectacular as we move higher up the mountains with the city buildings miniaturizing in size and the marine life swimming gracefully below. When we reached the summit, I got to mesmerize with fantastic view from the observatory tower with my binoculars. There is also a park which display magnificent ancient building that was built one thousand year ago. We returned in the evening with the night sparkling from the LED lights from the tramway. The spectacular view in the aerial tramway gave me the motivation to transform the wonders of travelling on tramway traversing into different scenes into Lego pieces. Therefore, this motorized aerial tramway Lego model is built.

I know many people made aerial tramway that isn’t motorized or at most using transparent brick to make the aerial tramway in the air. I want to make a difference to my model and thus my focus is to make my model able to stay and move in the air. I came out with the idea to use Lego bricks with Technic holes and beams to reinforce it. It works! Next, I decorate the aerial tramway like put some LED lighting, double seats for VIPs and a small table to put food and beverage. The observatory tower needs a lot of time to build to give it the optimum height, bricks and secure it to the mountain to make sure it wouldn’t fall. For the ancient building on the summit, I spent quite a lot of time to refine the build.

I think that my motorized aerial tramway set is a unique LEGO creation, which will be loved by people of all ages, especially those who loves nature around the world. This aerial tramway model can be just a display model, but it can be either crank or motorized making it even more outrageous with high contents of playability besides as a static art display.

This model can definitely be a great and wonderful LEGO set, should be one of its kind, and it will be a big market potential. It can be market retailed in aerial tramway ticket counter and will make a very nice giveaway to friends and family as a memorable souvenir with a build in photo frame that you been to an aerial tramway. Children can put their creativity in the LEGO model and it will come to life! Up up and Away!

Thank you for looking at my project. Please support my project by sharing this project to your friends and family. For all the people who love nature and things that really move in the air, you will like it. Thanks again.